This article by Richard Poynder was originally published via the LSE Impact Blog.

Plan S raises challenging questions for the Global South. Even if Plan S fails to achieve its objectives the growing determination in Europe to trigger a “global flip” to open access suggests developing countries will have to develop an alternative strategy. In this post Richard Poynder asks: what might that strategy be?

To succeed, Plan S will need other countries to commit to the initiative. To this end, Plan S architect Robert-Jan Smits spent considerable time last year lobbying funders around the world.

But should countries in the Global South sign up? Perhaps not.

The extremely tight deadline for Plan S (10 months from now), the onerous technical specifications set for OA platforms, the requirement that papers posted in them must be freely accessible from the day of publication with a CC BY licence, plus the insistence that hybrid OA is only compliant as part of a “transformative agreement” in which publishers commit to flipping their journals to open access, means that legacy publishers would have little choice but to replace current subscription revenues with article-processing charges (APCs). Since legacy publishers dominate scholarly publishing this means that Plan S would lead to a near universal pay-to-publish system.

APCs range in price from several hundred to over $5,000 per article. This is unfeasible for the Global South and so researchers would be excluded in a different (but more pernicious) way than they are under the subscription system: free to read research published in international journals but unable to publish in them.

As the CEO of Universities South Africa has noted: “We can’t have a very rapid shift and realise later that scientists and communities can’t afford to publish. We still don’t have a good handle on how much the pay-for-publishing model will cost.”

Elsewhere the Past-President of the Academy of Science of South Africa has said he doesn’t understand why South Africa is being asked to sign up to a Eurocentric Plan S. “We need to have local solutions”.

And in Latin America a group of leading research countries have called for a boycott of the APC model, warning: “an OA expansion policy, through the payment of APC fees, is impossible to undertake from a financial point of view for the participant countries.”

Yet Zambia has signed up to Plan S. Why? Perhaps because the enticing thought of research published by the Global North becoming freely available obscures the fact that signing up to Plan S means paying to publish. And countries that publish relatively few papers are more likely to overlook that. Scimago records 635 Zambian papers for 2017. By comparison, it records 626,403 US papers and 191,830 UK papers.

But what to make of the recent announcement that India also envisages joining Plan S? Scimago records 147,537 Indian papers for 2017, suggesting it is the fifth most prolific publisher of research in the world. The Wire estimates that joining Plan S could cost India an additional Rs 616.46 crore ($86,711,263) a year.

Talking to ScienceBusiness, the Principal Scientific Advisor to the Indian Government Krishnaswamy VijayRaghavan argued that the subscription system is too costly. Yet pay-to-publish simply moves the costs from the reading end to the publishing end.

In a series of tweets about Plan S, VijayRaghavan said that cOAlition S has committed to APC caps. “India will negotiate for fees normalised to India.”

But prior to his leaving cOAlition S to take up a new position as president of the Eindhoven University of Technology, Smits was rowing back on caps, saying that they are ‘not something we insist upon’. It is also not clear they work

cOAlition S has also said that no one will be unable to publish for lack of funds, implying that there will be some form of waiver system.

Is a waiver system a solution for any country in a pay-to-publish world? Would European funders or publishers be willing to subsidise the Global South in a meaningful way? Research4Life provides low and middle income countries with free or discounted access to paywalled content, but here the publishing costs are essentially covered by subscription revenue. Providing unfunded free or discounted publishing services to a whole country is very different.

To bolt these together again we are seeing attempts in Europe to negotiate Publish-and-Read agreements (PARs) where rights to access paywalled content are combined with OA publishing rights. The first PAR was signed in January between Wiley and the German consortium Project DEAL.

As European funders become more determined to force a flip, PARs could become their weapon of choice. The same approach is spreading to North America, with the University of California, for instance, seeking to force Elsevier down that road. While UC announced last week that it has walked away from the negotiations with Elsevier, I assume this is intended to pressure the publisher into changing its attitude.

Plan S may get insufficient support to trigger a global flip, but OA advocates have concluded that open access cannot make meaningful progress without one, so the pressure for a flip will only grow.

As noted, PARs are an attempt to bolt read and publish back together again. But the Global South might be better embracing the separation and sticking to traditional licensing agreements for the readelement and rely on local solutions for the publish element.

And the good news is that the developing world does not have to sign Plan S, or PARs, to benefit from them. As more and more research produced in the Global North becomes open access, paywalled prices should fall.

For the read element a licensing model pioneered by the National Agency for Research and Innovation in Uruguay (ANII) offers an interesting way forward. Launched in 2009 Portal Timbó provides free-at-the-point-of-use access to international research not just to researchers, but to all Uruguayan citizens.

Egypt launched a similar portal called the Egyptian Knowledge Bank (KBE) in 2016. This provides free-at-the-point-of-use access to content from international publishers to all 92 million Egyptian citizens.

What about the publish element? The further good news is that journals in the Global South still tend to be government-funded and run by universities, not outsourced to for-profit companies. They are therefore much cheaper to operate and many are APC-free diamond OA journals.

What I am suggesting is that the Global South adopt a two-pronged approach: focus on supporting existing APC-free journals and creating new ones for the publish element, and negotiate citizen-wide national licensing deals like KBE and Timbó for the read element. 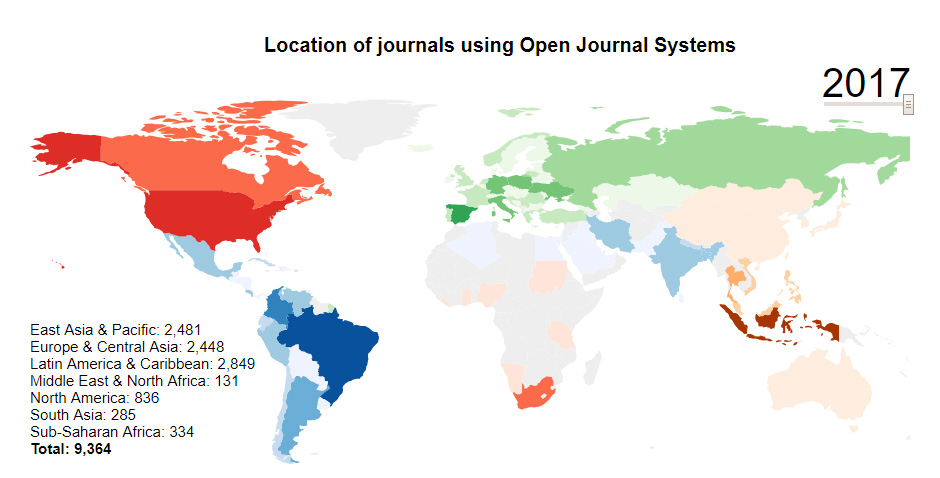 New OA journals can be created cost-effectively using the many institutional repositories that have been established in universities. Alternatively, there are open-source publishing solutions like Open Journal Systems (OJS) available.

OJS is already widely used in the Global South. In 2016, Latin America and the Caribbean accounted for3,295 OJS-hosted journals, making it the largest region of use. The second largest region is East Asia and the Pacific. In addition, African Journals Online (AJOL) uses OJS to host 523 journals from the African continent. In India a crowd-sourced project is putting together a list of local journals, with thousands already identified.

In other words, the basis of an alternative strategy is already in place. As a new Latin American initiative called AmeliCA points out, Plan S seeks to regulate commercial agreements, where AmeliCA is focused on “building an infrastructure from and for the academy.”

This article is licensed under a CC BY-NC-ND license, a longer version of this text is availabe here.

Richard Poynder has been observing and reporting on the evolution of the open access (OA) movement for fifteen years. During that time he has been variously praised, criticised and threatened.  Leading OA advocate Stevan Harnad has described Richard as the “chronicler, conscience, and gadfly laureate” of the OA movement. Richard tweets @RickyPo and writes his own blog Open and Shut?