LSE/Birkbeck research on donor-NGO: What is it about “broken” that we don’t understand?

Paul Vanags is the Head of Public Fundraising at Oxfam. His blog post first appeared on LSE’s think-tank ‘Polis’ blog on journalism and society. You can follow Paul on Twitter @PaulVanags

A new piece of research from Birkbeck/LSE highlights major issues with the ‘broken’ contract between donor and INGO’s such as Oxfam, Save the Children and others.

It asks big questions of Fundraisers. It calls into question the whole basis of our relationship with the public and with our supporters. If you’re serious about the cause you fundraise for, then you need to find some answers.

It builds on previous work which claims that the ‘quick buck’ approach taken by many is in conflict with the long-term aims of the sector (solving global poverty, eliminating preventable death of children etc).

In a nutshell it says that the “hit and run” approach by these charities (and by my implication, others too) is destroying their relationships with donors and questions whether this leaves us with a “crisis of caring”?

The findings of the report build on debate which has been going on within the sector for some time revolving around issues of representation of ‘distant suffering’ and the long-term impact on public perceptions. The report is unique as far as I’m aware in that it covers the views and experience of NGO practitioners and our experience of the pressures of working with these issues on a day to day basis.

In her 2012 book ‘Representations of Global Poverty’ Nandita Dogwra describes how in 2007 the major Humanitarian NGO’s signed an accord to desist from using extreme images of poverty in their communications. It’s arguable how much has changed as a result.

As the report succinctly puts it, either;

So this is a constant noise in the sector for many years – why does it remain an unsolved problem? Let’s open it up a bit and have a look at the arguments.

What do Academics say?

Present the issue of global poverty with a non Euro-centric historical context (try this?), demonstrate the broader picture, avoid dumbing down, don’t just make it about innocent kids, win people’s hearts and minds before we go for the contents of their wallets. This particular report asks us to “reflect on current practices”, and more specifically to;

Essentially, they say, Humanitarian NGO’s need to do a bit less of this:

And a bit more of this:

What do Fundraisers say?

They firstly will probably say “when was the last time you did any fundraising?” Then they’ll say “We know what works!” You need to show the need, people don’t give without it. And this is backed by science. Psychologists say that the anticipation of guilt drives giving, along with the pay-off of the “warm glow”.

Advertising research shows that emotion is king and in particular that feelings of sadness drive action more than feelings of happiness. Moral philosopher Peter Singer’s famous thought experiment regarding a child drowning in a pond is telling for Fundraisers . It is a moral story which is 100% about need. It has no context (where are the parents?), no history (why hasn’t the child been taught to swim?) and no channel for dialogue (can’t we just chat to the child and empower her to extricate herself?).

There is a important nuance here. The LSE/Birkbeck report does not say “don’t show images of suffering”. It’s not quite that simple I’m afraid. It does say that emotions need to be ‘manageable’ for the receiver. To quote “people expect and accept to feel sad and upset by humanitarian communications, individuals need to be able to make sense of the upset and to feel it has integrity of purpose. If perceived to be manipulative and exploitative, it leads to desensitisation and resentment”. This forms part of their “3M” model for what good looks like with regard to communicating on distant suffering (see below).

So in addition to the years of practical experience of fundraisers the world over, there’s plenty of very sensible things said by very sensible people explaining WHY this stuff works.

And we have to appeal to a broad base. Contrary perhaps to intuition, it’s a simple fact that the majority of Oxfam donors vote Conservative and read the Daily Mail. Our duty is to take the intellectual “head” (rational, big picture, systemic) of Oxfam and translate it to the hearts (emotional, individual, one-off) of others, and not just a liberal intellectual elite who “get it”. (God we hate those elites don’t we?)

But we DO have a problem.

The Gates funded Aid Attitude Tracker (AAT) puts in sharp relief what I imagine we all see through our own tracking and research. Take a look at their “18 Actions” chart which shows the public engagement over time with, you guessed it, 18 different actions people can take in support of our cause. All 18 of them are heading south – it sure ain’t pretty. 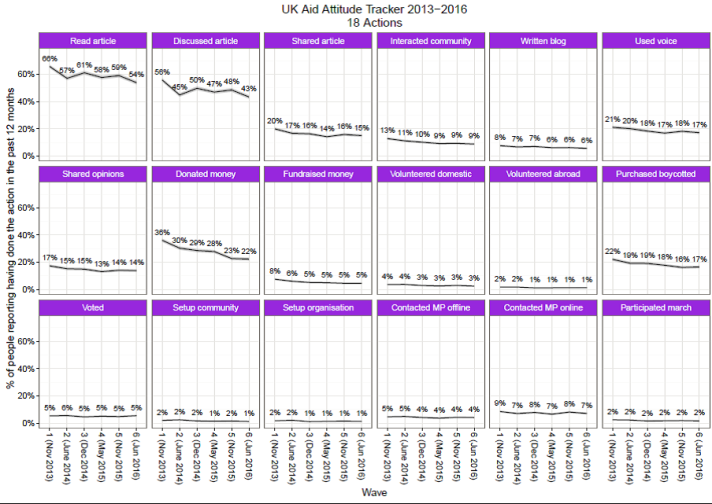 So we understand why Fundraisers do what they do (because it “works”) and we also understand that in doing so we are damaging the long-term health of the sector and our chances of bringing about the ultimate change we want to see.

How has fundraising ended up here?

When you do “5 whys” on this issue, you’ll find that the crisis here is not one of caring, it’s a crisis of objectives. It’s a boring answer I know, but I think it’s the right one.

As long as Fundraisers have objectives that look like this (real example taken from my own team by the way, although not this year, numbers removed to protect the guilty); To deliver the change the sector wants and needs, we need to be measuring the success of our Fundraisers differently. It’s not complicated. Difficult, yes. Scary, yes. But not complicated.

What do we need to do to make it better?

We need to be able to balance responsible financial management and planning, with a new set of softer metrics, structured not around cost-of-acquisition and response rates, but around engagement – both quantity and quality. Easy to say, hard to do. But we have to do it. At Oxfam we’re moving in the right direction albeit in small steps. We used to measure “net positive months” ie. The net movement of our regular giving base (which can go up or down unfortunately!) each month. We still do measure that (it’s kind of important), but we’ve banished it off the front page of our KPI’s and replaced it with a net monthly measure of engagement to focus management discussion on this. We are actively talking about what the right measures are, and 2017 will see our Fundraisers performance measured and evaluated using much broader, softer measures than we’ve ever seen before. We’re working hard to bring the public closer to our cause with initiatives like showing real-time data on where donations are spent, our new app which allows donors new access to bite-size content and a way to control their giving, as well as trialling things like VR in our street fundraising.

Whilst brilliant and the backbone of many charities unrestricted income, the Regular Giving model has been an enemy not a friend here. The regular gift has set up a dynamic of hard-sell followed by inertia equalling a profitable model. How different would the world be if we had to ask and thank for every monthly donation – that’s the philosophy of Oxfam’s new app, designed to give the warm glow of giving every month for a donors lifetime, not just the day they signed up.

So we’re getting there. Undoubtably we won’t be perfect and I’m expecting lots of people throwing back a whole heap of examples to demonstrate that – great! My challenge to you is that if you’re really serious about the cause you work for, if you’re really serious, then you need to think about this stuff. Is your organisation brave enough to allow its fundraising team to relax a little, to experiment more. Can you try things which might not give an immediate return, but move the big goal a little closer?

A higher ambition for Fundraising

We work for wonderful causes, with inspiring and important aims. Long term aims like ending poverty, eliminating child mortality, protecting animals from cruelty and so on. Why do we have such lowly ambitions for our fundraising?

Fundraising alone is not going to save the world.  There I said it. If I did an amazing job and doubled Oxfam’s income, it would still be a drop in the ocean compared to the scale of the problem. I imagine that goes for most big charities with big goals. Mandela said the ending poverty is not an act of charity, it is an act of justice. It points to the fact that poverty like so many of the world’s ills is a status created and perpetuated by political decisions. To help to change that we need a movement of active, engaged people representing a forcible political will. And we‘re not going to get there by hit and run fundraising tactics.

Yes first of all we need to engage and find those who care about the issue. If we want to engage large numbers and turn this crisis of caring around movement we have to be open to people engaging on their own terms and values. That means showing need, it means talking about humanitarian emergencies, but not as the only discourse and not at any cost. The long term health and future of the sector is simply more important.

In big organisations objectives drive everything we do. Change them and we change the world. Let’s do it!

@SIIDgroup
A pre-Christmas treat - read our latest @SIIDgroup blog on #storytelling in research as presented at the recent… https://t.co/utjDAE6MVo
Wonderful opportunity, to work with wonderful colleagues at @LSEGeography! https://t.co/YawddbrMuX
Read the latest blog by @JudithEKrauss summarising the themes of the #POLLEN20 double session on… https://t.co/MsclJcb3AN