This article was written by Chris Jordan, Communications and Impact Manager at the Global Development Institute and was originally published via the GDI Blog, here.

After setting out to better understand the UK’s development NGO sector, SIID’s Dan Brockington and Nicola Banks of the Global Development Institute soon realised that pulling together the data on thousands of charities would be a huge challenge.

After heroic amounts of filtering and crunching data, their research produced some fascinating insights into the health of the sector as a whole. While working closely with a range of charities, the researchers soon realised there was a real desire (particularly on the part of smaller NGOs and those based outside of London) to access similar information and connect with their counterparts. 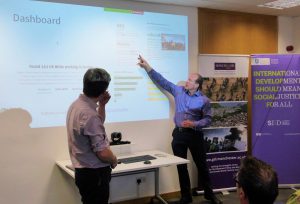 While the funding environment strongly encourages (and often necessitates) collaboration across charities, there is very little support in place to facilitate that.

To help plug this gap, Dan and Nicola began working on a simple, accessible website that would allow people to search and interrogate publicly available data on the vast number of UK charities working overseas. They linked up with open data enthusiasts who have already been active in this area, including Dan Kwiatkowski and David Kane, as well as like-minded colleagues in the sector in Bond (particularly Sarah Johns), the FSI and the Small International Development Charities Network Facebook group.

A combination of their enthusiasm, experience and expertise meant after only a few months of development, the NGO Explorer was unveiled at BOND and quickly put through its paces by a range of small charities. 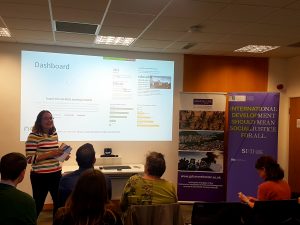 Using the NGO Explorer to search for a country such as Malawi and you’ll find the details of 802 UK-based NGOs working in the country. You can quickly see what sectors they work in, where else they work and who they work with. The dashboard links to IATI data on projects in the country, as well as a host of other online resources. A list of all the charities and their contact details can be seen and all the data can be downloaded directly from the site. And, in what is perhaps the best feature, the site permits searches of key words used in NGOs’ own descriptions of themselves which provides a much more informed way of searching for specific activities and interests.

The same search can also provide fascinating insights into patterns within the UK. A search for NGOs in Sheffield brings up 100 different organisations, who work in 146 different countries, spending a total of £175 million a year. You can drill down into the size of these organisations by income and expenditure, with links off to a host of more detailed information.  All searches can be refined by size, activities and locations for a clearer view.

As Dan Brockington points out “providing onward links to other similar sites and networking devices is essential because a site like this can only really work if it fits into a broader ecosystem of networking activities and organisations. After all, it is only a website. To be a success it will have to be used as a spring-board for contacts, interactions and exchange.”

So far, the feedback suggests it has been playing this role. The response from contacts in DfID was “WOW!!!!” – and yes, that was four exclamation marks. Pauline Broomhead, CEO at the Foundation for Social Improvement remarked, “Whatever thoughts or ideas you’re having, you can go off and find different things. It’s a tool you can play with, which really assists with networking. In a sector that’s increasingly stretched, greater collaboration has to be the answer.”

Vic Hancock Fell, director of Raising Futures Kenya echoed these thoughts: “The future of the sector is through collaboration: we can’t exist in isolation. I’ll be using the NGO explorer to find out the other charities where I’m based in Sheffield who also work in Kenya and using it to connect with people who are doing similar work.”

The site is based on Charity Commission data for England and Wales, made accessible and kept updated via Charity Base(created by Dan Kwiatkowski). Finding ways to include Scottish and Irish NGOs in the tool is the next priority.

We’re fascinated to hear if people find the site useful and how it could be improved – so please let us know!

The NGO Explorer project was funded by the ESRC and the Global Challenges Research Fund and supported by the Universities of Sheffield and Manchester.